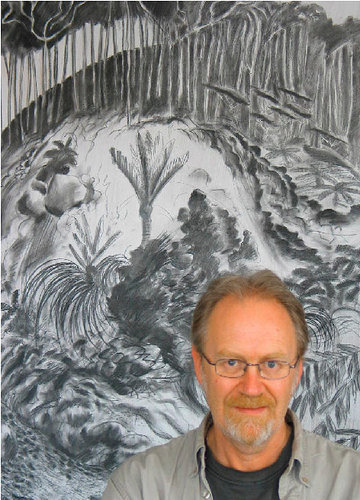 I have been making art since the early eighties when I went to Art school in South Australia.

During that time I have also been a lecturer at Auckland University of Technology, in Auckland New Zealand, and a children's book illustrator.

I have exhibited many times in Australia and New Zealand and have works in public and private collections in these countries and internationally.

In 1997 I received my Master of Fine Arts from the University of Auckland, New Zealand.

I am primarily interested in using drawing and painting to interpret and respond to the landscape and in particular, more recently, its relationship to still life, although other elements often enter into the work as well.

Look at it From This Angle, (solo installation) Axiom Gallery,Tauranga

1989 9th International Biennial of Humour & Satire in the Arts,